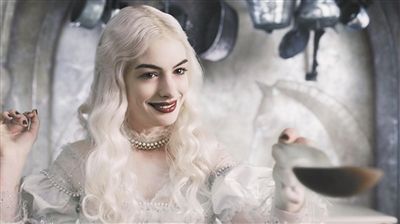 1.在渡渡鸟严肃地提议休会以便立即采取更有效的补救措施来把大家弄干之后，小鹰说：“请说英国话！这些个词儿都挺长，我连一半都没听懂，而且我相信你自己也听不懂。”
Number 10 spot is given to Eaglet:
Alice and many animals and birds along with a Duck, Dodo, Lory and Eaglet swam from a lake that was actually a pool of Alice's tears. While at the shore they were discussing how to get dry. Dodo was talking in business terms about adjourning the meeting and adopting more energetic remedies. To this Eaglet called out this quoted sentence:
"Speak English! I don't know the meaning of half those long words, and I don't believe you do either!" -Eaglet
2.爱丽丝在法庭上和红心女王争论应该先裁决还是先审判的时候发觉自己恢复到了正常大小，于是就叫了起来：“你不过是一堆扑克牌而已！”
Number 9 is a quote from Alice herself.
This takes place during the court scene. Alice argues with the Queen of Hearts about the order of a verdict and a sentence, and then Alice realizes that she is her normal size again and does not need to care what the Queen says. This is why she yells out:
"You're nothing but a pack of cards!" -Alice
3.公爵夫人在努力回忆起只想不说的寓意是什么，爱丽丝觉着这事儿没啥寓意，公爵夫人回答说：“凡事都有寓意，只要你肯去找。”
Number 8 is from the Duchess during the game of croquet after she is released from prison to take part in the game. Alice is quietly thinking about how pepper and other spices affect people.
The Duchess is trying to remember what kind of a moral there is in thinking and not speaking. Alice thinks that there is no moral in it. Therefore the Duchess teaches Alice that:
"Everything's got a moral, if only you can find it." -The Duchess
4.爱丽丝同假海龟和格里芬讲述她这一整天的奇怪经历，格里芬让她背《这是懒汉在说话》，一背出来词儿全不对了，假海龟就说：“哦，我以前从没听过这首诗，但是听上去整个一胡说八道。”
Number 7 is a quote from the Mock Turtle. He, the Gryphon and Alice are at the sea shore. Alice tells them about her adventures of the day and how she was repeating a poem to the Caterpillar and how the words came out all wrong. The Gryphon is very interested and asks Alice to repeat a poem called "It's the voice of the sluggard". Of course the words come out all different again. This is what the Mock Turtle calls it:
"Well, I never heard it before, but it sounds uncommon nonsense." -The Mock Turtle
5.爱丽丝跟随白兔进了兔子洞，然后发觉这是一条长长的走廊，她听见白兔说：“我要命的耳朵跟胡子啊，我要迟到了！”
At number 6 is a quote from the White Rabbit. Alice follows the White Rabbit into the rabbit hole and finds herself in a long corridor. She sees the White Rabbit hurrying down the passage. Alice sprints after him just in time to hear the White Rabbit say:
"Oh my ears and whiskers, how late it's getting!" -White Rabbit
6.这句话非常著名了，来自残暴的红心女王，那句反反复复气势汹汹的：“剁掉她的脑袋！”
Number 5 place is given to a famous quote from the Queen of Hearts. She uses this expression quite often in the story. One time is when Alice meets the Queen for the first time. After Alice has introduced herself, the Queen asks her about the three playing card gardeners lying on the ground. But because Alice does not know them and expresses that to the Queen quite casually, the Queen of Hearts gets furious and screams to Alice:
"Off with her head!" -Queen of Hearts
7.红心国王这句台词可谓相当纠结，简直是一句话的废话连篇，他让白兔读信，白兔不知道从哪里开始，国王就命令道：“从开头开始接下去接着来到最后就停。”
At number 4 is a quote from the King of Hearts. This happens at the hearing in court while the King asks the White Rabbit to read a set of verses in a letter, written by the prisoner to somebody. The White Rabbit does not know where to begin.
"Begin at the beginning and go on till you come to the end: then stop." -The King
8.来自疯帽子先生和三月兔在疯茶会上的这个谜语也称得上是令人难忘：“为什么乌鸦像桌子？”谜底是……他也不知道谜底是啥。
On the third spot is quite an odd question by the Mad Hatter.
Alice is at the March Hare's house and the Mad Hatter is there with Dormouse as well. They are having a tea party. The March Hare and Alice get into an argument about Alice's right to join the tea party. Then the Mad Hatter makes Alice even more furious by telling her she needs a haircut. Of course Alice declares that to be rude, but the Mad Hatter answers her with a riddle:
"Why is a raven like a writing desk?" -The Mad Hatter
9.这句话是全书的精髓吧？来自爱丽丝吃了蛋糕之后开始疯长，她惊叹道：“越奇越怪，越奇越怪。”
Here we are, getting closer to the best quotes of them all. At number 2 position is a short and famous exclamation from Alice.
Alice eats a cake and expects something peculiar to happen to her. And finally her neck grows and grows so much that in the end she does not even see her own feet. Alice is so surprised that for a moment she forgets to speak good English and cries out:
"Curiouser and curiouser." -Alice
10.最著名一句《爱丽丝梦游仙境》台词，来自赫赫有名的柴郡猫：“我们全都疯了。”
Finally, number one, the most famous Alice in Wonderland quote. This quote comes from a conversation between Cheshire Cat and Alice. The grinning Cheshire Cat is giving directions to Alice and tells what sort of people live in each direction in the woods. Then he discloses as a matter of fact that:
"We're all mad here." -Cheshire Cat
以上就是“10句美国3D电影《爱丽丝梦游仙境》中的经典台词”的内容，感谢您的阅读，喜欢的话就赶紧收藏吧。想要阅读更多关于外国电影台词的内容，请关注牛台词（cnhbtc.com），我们为您准备了更新、更好、更经典的台词文章，更多精彩内容，不容错过。
本文关键词： 美国电影 3D 3D电影
文章由牛台词整理发布，转载请注明出处！本文链接：http://cnhbtc.com/wgdytc/wgdytc765.html
查看更多相关的台词